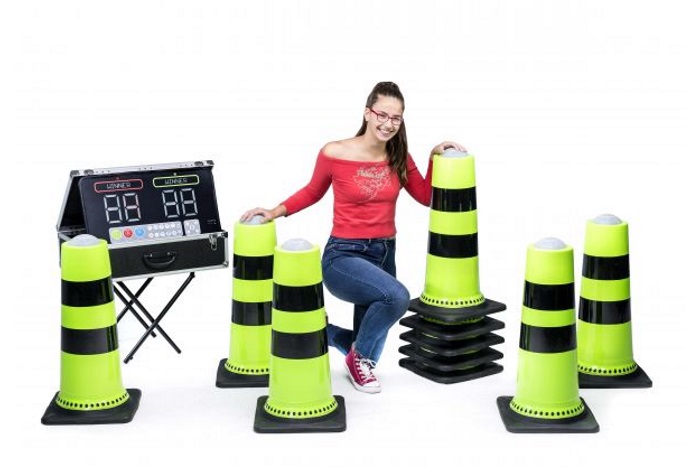 Tag the Light Crazy Cones
Looking for a NEW and unique game rental idea that your guests haven’t seen or played? Our Interactive cones are an amazing game with endless possibilities!

This fast pace high energy game tests your reflexes, coordination and endurance! It can be used for Football Training, CrossFit Exercise, Team Building, Youth Sport Camps, Carnivals, Birthday Parties, School P.E. Games and any other event where you want to get the adults and kids interacting with each other! The rental comes with 10-20 cones. The Crazy Cones play sounds when tapped and connect wirelessly to the scoreboard. It does not require an electrical outlet, making it easy to set up in any location!

1. Light Hunter: Tap as many of your color lights as you can before time runs out. The Player with the most tap wins!
2. Steal the Light: When the light shows up tap it as fast as you can before your opponent gets it, first to tap gets a point. The player with the most taps wins!
3. Back to Base: Tap as many lights as you can, while return back to “base” after each tap. This game is only played with the LED Cones and LED Bounce.
4. Hit Counter: Set a hit goal 10 -25-50-100 then you and your opponent see who reaches it first. The first to reach the selected amount wins!
5. Memory: This is a 3-minute game. The goal is to find the same sound in two different lights. Each light has a speaker and when it’s pressed it makes a sound. Once a match has been made the matching lights turn blue and the that team gets a point. Play continues until all light have been matched (turned blue).

The Interactive Cones game system comes with a large LED scoreboard. Everyone can see the Green and Red Team scores in real time, allowing for more excitement and anticipation!