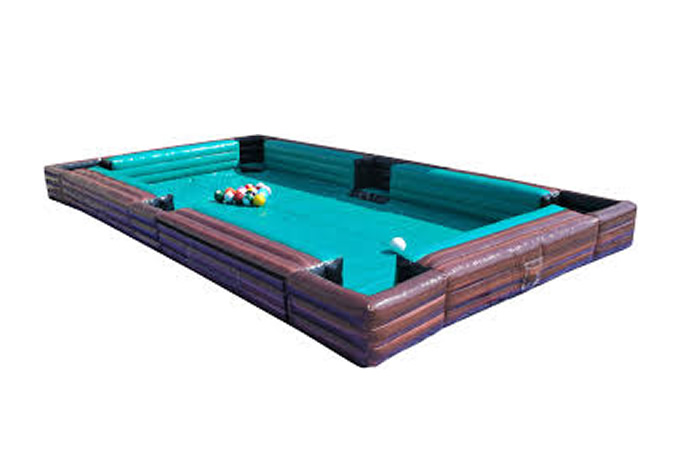 Looking for something different, exciting, and new for your next event? We have taken the traditional game of pool and “Super Sized” it. Our larger than life inflatable human billiard rental combines the game of pool with the skills of soccer. Whether you call it Foot Pool, Human Billiards or Snookball; It will keep everyone moving and entertained for hours!

Human Billiards can be played with up to 4 players for a game of doubles or just one on one with you and a friend, either way, it is impossible not to have a blast when playing!. You can also play a game of “Knock Out’ with up to five players. Depending on the game and number of players you can play 30-90 people on it per hour

You can play a variety of games such as 8-Ball or 9-Ball. The rules and objective for Human Billiards a.k.a. Snookball remain the same as normal pool, only there is no cue sticks and you may only use your feet to kick the ball. This new and exciting game is sweeping the world. Snookball was originally created by two French entrepreneurs, who added a fun twist to the game called “The Snookball Rule”.

The Snookball Rule.
​
A Snookball occurs when a player manages to pocket one of their balls by sending the cue ball over an opponent’s ball using a “scoop”. When a Snookball is successful, the player who made the shot can take one of the balls that their opponent has already pocketed and put it back in play.